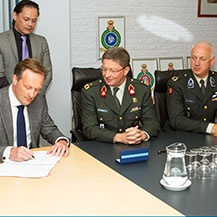 Due to the high weight of defence equipment, parties will develop alternative “polymer material”  to decrease the weight of heavy bulletproof glazing of armoured vehicles/trucks and naval patrol boats. A significant weight reduction will lead to lower fuel consumption, reduced CO2 emissions and will increase the range of defence equipment.

By varying process and production techniques and combinations of plastics with other materials, an ideal window can be developed that meets all requirements. These new laminates will, after certification by TNO, be built-in by the manufacturers of defence vehicles and vessels.

In addition to the development of lighter and thinner plastic glazing for the bullet proof application, coated nano-particles will be used to achieve EMI shielding. This will protect the army vehicle or marine vessel against electromagnetic radiation from outside, which seeks to disrupt equipment on board.

This Codemo project will be lead by Allplast, with knowledge and material contribution of the Technical University Eindhoven (Laboratory of Polymer Materials), TNO (Laboratory for Ballistics Research), Arkema Colombes France and Sabic from Bergen op Zoom, a well-known producer of polycarbonate sheets.